“Salomon's House... is dedicated to the study of the works and creatures of God. Some think it beareth the founder's name a little corrupted, as if it should be Solamona's House. But the records write it as it is spoken.”

A myth is a story that speaks of truth in an allegorical way. Very often the myth is a poetic means of explaining a natural or social phenomenon, or of describing the hero or heroine’s path of life and initiation, using historical or invented characters and events, and involving the spiritual world (e.g. gods and goddesses) as well as the natural environment.

An archetype, on the other hand, is an original law, pattern, model or prototype after which other similar, derivative things are patterned. At the highest level they are what are referred to and described allegorically as gods and goddesses, or angels and archangels, etc.. Plato’s (and Bacon’s) name for these archetypes is “Forms”, also described as “living ideas” or “divine ideas”. (Angel, or ang-el, for instance, literally means “thought of God” or “divine thought”; hence angels are also known as “intelligencies” or “messengers”. They are the “holy spirits” or thought-forms that embody and convey the Word of God.)

Francis Bacon’s Great Instauration is a project with a special method for acquiring knowledge of all things, natural, human and divine, for philanthropic or charitable purposes. Its approach is methodical and scientific, and designed for the discovery of “Forms” or Archetypes; yet at the same time Bacon recognises mythology as an important poetic language to help us comprehend these archetypes and how they work, including how they affect and manifest in our human lives and in nature.

In the foreword to his De Sapientia Veterum or Wisdom of the Ancients, Bacon tells us that he regards many of the mythological fables as containing “the concealed and secret learning of the Ancients”, and that although he has “seen into the levity which the mind indulges for allegories and allusions”, yet he “cannot but retain a high value for the ancient mythology”. He goes on to say that “since religion delights in such shadows and disguises, to abolish them were, in a manner, to prohibit all intercourse betwixt things divine and human”. His conclusion is that “a concealed instruction and allegory was originally intended in many of the ancient fables”, not dissimilar to certain scriptural teachings such as the parables spoken by Jesus to the general public, the inner wisdom of which he explained privately to his disciples.

Indeed, Bacon himself not only makes an interpretation of some of the myths of the Ancients (e.g. his Wisdom of the Ancients and On Principles and Origins according to the fables of Cupid and Coelum) but he also uses various myths, classical and scriptural, to describe his work, and creates some new myths of his own, such as New Atlantis. All of this can only be for the same purpose as he ascribed to the Ancients, as also to Jesus and the Scribes and Prophets—to contain a concealed and secret learning.

In fact, mythology is a form of poetry and in his Advancement of Learning Bacon identifies three main forms of poetry: Narrative, Dramatic and Allusive. 1  About these he says:-

Mythology, therefore, can be described as allusive or parabolic poetry, and this was clearly of great importance to Bacon. He wanted his own doctrine to “enter quietly into the minds that are fit and capable of receiving it”. 2  In his Valerius Terminus he wrote:-

That the discretion anciently observed, though by the precedent of many vain persons and deceivers disgraced, of publishing part, and reserving part to a private succession, and of publishing in a manner whereby it shall not be to the capacity nor taste of all, but shall as it were single and adopt his reader, is not to be laid aside, both for the avoiding of abuse in the excluded, and the strengthening of affection in the admitted. 3

In his Advancement of Learning Bacon identifies two distinct methods: Magistral and Initiative. In explaining what he means, he says that:-

… (borrowing the word from sacred Ceremonies) we call that Initiative Method, which discloses and unveils the Mysteries of Knowledges. For Magistral teaches, Initiative insinuates: Magistral requires our belief to what is delivered, but Initiative that it may rather be submitted to examination. The one delivers popular sciences fit for learners, the other sciences as to the Sons of Science. 4

To this he adds two further methods, Exoteric (open, revealed) and Acroamatic (enigmatic, concealed), the latter being so that:-

… by the intricate envelopings of delivery the profane vulgar may be removed from the secrets of sciences, and they only admitted which had either acquired the interpretation of parables by tradition from their teachers, or by the sharpness and subtlety of their own wit could pierce the veil.” 5

In doing this, Bacon is following the example of all great Kabbalists, such as Moses and Solomon and Jesus, who revealed some things and hid others according to the capacity and readiness of the student: “These words shalt thou declare and these shalt thou hide…” 6

Kabbalah, which is knowledge of the Divine, recognises four main levels of interpretation of the Scriptures, represented by four letters that form the Hebrew word PRDS (Pardes) meaning ‘Orchard’, from which we get our word ‘Paradise’. These are the initial letters of four words used to describe the four primary levels of interpretation:-

Each level is a veil to the following one. When one has successively passed all the veils, P-R-D-S, then one is in Paradise, a state of illumination and joy.

The Archetype for these four levels of interpretation is that which is referred to in Kabbalah as the Four Worlds of Emanation, Creation, Formation and Action, wherein the most esoteric or secret level is analogous to the World of Emanation and the most exoteric or literal level is analogous to the World of Action. Depending on one’s use of terms, these can be said to correspond to what is called divinity, spirit, soul and body. They also relate to the cyclic process of initiation: impulse, learning to love, learning to understand and learning to serve, described metaphorically and allegorically as birth, baptism, transfiguration and crucifixion (followed by resurrection or rebirth in the next ‘higher’ cycle). Many myths are concerned with this process of initiation which brings about a raising of consciousness (resurrection) and illumination (revelation), whilst others are concerned with the creative process which is a descent of the spiritual light of love and wisdom into material form. It is a two-way process, one that is represented symbolically by the ‘AA’ hieroglyph, sometimes presented as ‘AV’ (as in King James’ Authorised Version of the Holy Bible) or ‘VA’ (as in Venus and Adonis), the combination of which produces Solomon’s Seal and the six-pointed Blazing Star, the symbol of perfection.

Besides continual references to the Scriptures and, of course, the Wisdom of the Ancients, the outstanding myths of primary importance that Bacon uses or refers to, or are used in reference to Bacon and his work, are those of Atlantis, Solomon’s Temple, King Arthur and the Knights of the Round Table, St George and the Dragon, Cupid, Proteus, Pan, Saturnus (Time), Janus, Apollo, Athena, Diana, Fortuna, Jupiter, Demeter, Persephone, Bacchus-Dionysus, Orpheus, the Gemini, Venus and Adonis, Venus and Mars, Hyacinth, Trophonius, Hermes Trismegistus, Saint Alban, and the mythology associated with the Rosicrucians and Freemasons. One should really add to this the myth of Shakespeare. 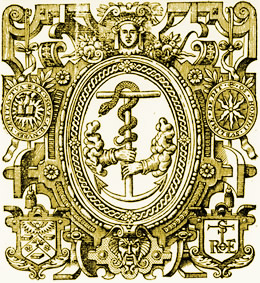