“Praise is not confined to the qualities of his intellect, but applies as well to those which are matters of the heart, the will and moral virtue… having all the thoughts of that large heart of his set upon adorning the age in which he lives, and benefiting, as far as possible, the whole human race.”

The following is a small sample selection of tributes that provide insights into the character of Francis Bacon by his contemporaries who knew him well. Not only do they describe his immensely loving nature, outstanding genius, witty humour and extraordinary range of talents, but also some of them openly hint at his secret work, particularly as a poet-playwright.

[For a more comprehensive selection together with comments and context, please see the information paper, ‘Tributes to Sir Francis Bacon’. The metaphysical poet George Herbert's tribute In Honour of the Illustrious Lord Francis of Verulam, Viscount St Alban also offers many profound insights into and appreciation of this remarkable and much-loved man.]

"Praise is not confined to the qualities of his intellect, but applies as well to those which are matters of the heart, the will and moral virtue; being a man both sweet in his ways and conversation, grave in his judgments, invariable in his fortunes, splendid in his expenses, a friend unalterable to his friends, an enemy to no man, a most indefatigable servant to the King, and a most earnest lover of the Public, having all the thoughts of that large heart of his set upon adorning the age in which he lives, and benefiting, as far as possible, the whole human race…
"It is not his greatness that I admire, but his virtue; it is not the favours I have received from him (infinite though they be) that have thus enthralled and enchained my heart, but his whole life and character; which are such that, if he were of an inferior condition I could not honour him the less, and if he were my enemy, I should not the less love and endeavour to serve him."

"A man so rare in knowledge, of so many several kinds endued with the facility and felicity of expressing it in all so elegant, significant, so abundant, and yet so choice and ravishing a way of words, of metaphors and allusions as, perhaps, the world hath not seen, since it was a world."

Tobie Matthew, Preface to his Collection of Letters (published 1660

"I have been induced to think, that if there were a beam of knowledge derived from God upon any man in these modern times, it was upon him. For though he was a great reader of books, yet he had not his knowledge from books, but from some grounds and notions from within himself; which, notwithstanding, he vented with great caution and circumspection…
"This lord was religious: for though the world be apt to suspect and prejudge great wits and politics to have somewhat of the atheist, yet he was conversant with God…"

"Yet there happened in my time one noble speaker [Francis Bacon, Lord Verulam] who was full of gravity in his speaking; his language, where he could spare or pass by a jest, was nobly censorious. No man ever spake more neatly, more pressly, more weightily, or suffered less emptiness, less idleness, in what he uttered. No member of his speech but consisted of his own graces. His hearers could not cough or look aside from him without loss. He commanded where he spoke, and had his judges angry or pleased at his devotion. No man had their affections more in his power. The fear of every man that heard him was lest he should make an end."

Ben Jonson, ‘Dominus Verulamius,’ Timber, or Discoveries Made upon Men and Matter (1641)

"[Bacon] is he who hath filled up all numbers, and performed that in our tongue which may be compared or preferred either to insolent Greece, or haughty Rome. In short, within his view, and about his times, were all the wits born that could honour a language, or help study. Now things daily fall: wits grow downward, and Eloquence grows backward. So that he may be named and stand as the mark and acme of our language."

Ben Jonson, ‘Scriptorum catalogus,’ Timber, or Discoveries Made upon Men and Matter (1641)

"My conceit of his Person was never increased toward him by his place or honours. But I have and do reverence him for the greatness that was only proper to himself, in that he seemed to me ever, by his work, one of the greatest men and most worthy of admiration that had been in many ages. In his adversity I ever prayed that God would give him strength: for greatness he could not want. Neither could I condole in a word or syllable for him, as knowing no accident could do harm to virtue, but rather help to make it manifest."

Timber, or Discoveries Made upon Men and Matter (1641)

"As Eurydice wandering through the shades of Dis longed to caress Orpheus, so did Philosophy, entangled in the subtleties of Schoolmen, seek Bacon as a deliverer... He renewed her, walking humbly in the socks of Comedy. After that, more elaborately he rises on the loftier buskin of Tragedy..."

"The very nerve of genius, the marrow of persuasion, the golden stream of eloquence, the precious gem of concealed literature..."

"The jewel most precious of letters concealed…"

"…he [Bacon] who was in our sphere the brilliant Light-Bearer, and trod great paths of glory, passes, and fixed in his own orb shines refulgent."

"Bacon... a muse more rare than the nine Muses.

"You have written, O Bacon! the history of the life and death of us all.... Nay, give place, O Greeks! give place, Maro, first in Latin story. Supreme both in eloquence and writing, under every head renowned...."

To the Royall Ingenious and All-learned Knight, Sir Francis Bacon.
Thy bounty and the beauty of thy witt
Compris’d in lists of Law and learned Arts,
Each making thee for great Imployment fitt,
Which now thou hast (though short of thy deserts,)
Compells my pen to let fall shining Inke
And to bedew the Baies that deck thy Front,
And to thy Health in Helicon to drinke,
As to her Bellamour the Muse is wont,
For thou dost her embosom; and dost use
Her company for sport twixt grave affaires:
So utter’st Law the livelyer through thy Muse.
And for that all thy Notes are sweetest Aires;
My Muse thus notes thy worth in ev’ry line,
With ynke which thus she sugars; so, to shine.

To the Most High Chancellor of all England, FR. BA.
How great thou stand’st before us, whether the thorny volumes of the Law
Or the Academy, or the sweet Muses call thee, O Bacon!
How thy prudence rules over great affairs!
And thy whole tongue is moist with celestial nectar!
How well combinest thou merry wit with silent gravity!
How firmly thy love stands by those once admitted to it. 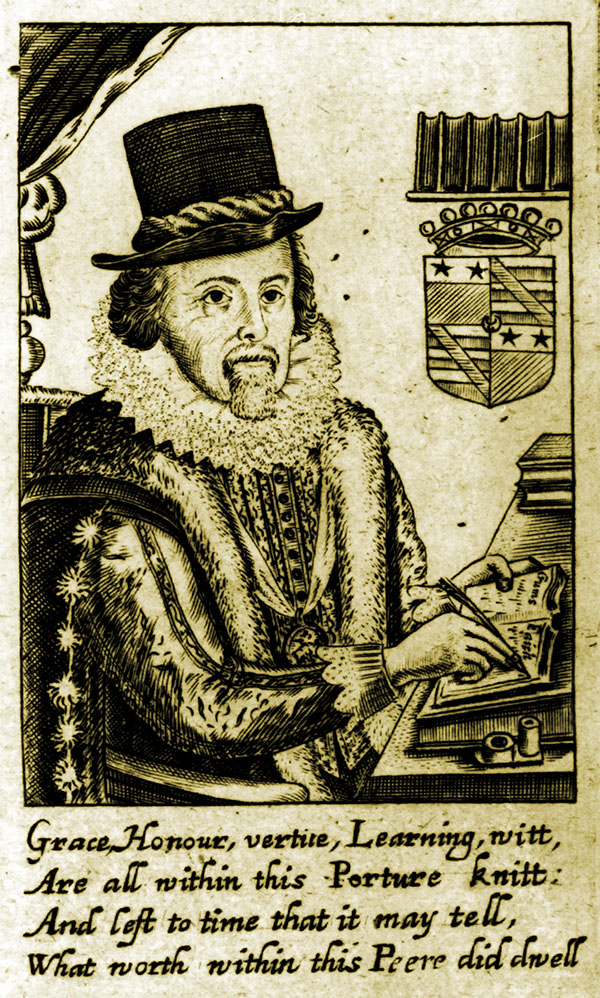