“The knowledge of man is as the waters, some descending from above, and some springing from beneath; the one informed by the light of nature, the other inspired by divine revelation. ... So then, according to these two differing illuminations or originals, knowledge is first of all divided into Divinity and Philosophy.”

Bacon’s brainchild is his Great Instauration, a project he conceived for the step-by-step restoration of a state of paradise upon earth, but coupled with the illumination of mankind. In other words, whereas mankind was innocently ignorant in the original paradise, in the future paradise all human souls will have reached a state of knowledge of truth. To know truth we have to practice truth. Since truth is love, then this means the practice of love. Bacon recognised that we need a science of love in order to learn how to love well and appropriately in all situations, as also to learn what love does and can do, as the primary creative force of the universe.

Key to the Great Instauration is the idea of Divinity and Philosophy, the former being divine knowledge (wisdom) and the latter being human knowledge. Divinity consists of the wisdom directly inspired or revealed to us. Philosophy comprises the understanding and knowledge of that wisdom as it operates with divine power in nature. The two (Divinity and Philosophy), although distinct from each other, go together hand-in-hand, with the latter serving the former as a handmaiden serves her mistress. Bacon’s Great Instauration is primarily concerned with the handmaiden (Philosophy), as he considered that the world was already well provided for in terms of the mistress (Divinity).

Using another metaphor, Bacon describes the Great Instauration as building a temple in the mind in which dwells Divinity and which serves Divinity. He likened this temple to Solomon’s Temple, and also to a Pyramid—the Pyramid of Philosophy. This Pyramid has three sides, equating to what Bacon specifies as the three primary areas of study—Divine, Natural and Human. The three sides thus represent Divine Philosophy, Natural Philosophy and Human Philosophy.

In Philosophy, the contemplations of man do either penetrate unto God, or are circumferred to Nature, or are reflected and reverted upon himself. Out of which several inquiries there do arise three knowledges, Divine Philosophy, Natural Philosophy, and Human Philosophy or Humanity. For all things are marked and stamped with this triple character of the power of God, the difference of Nature and the use of Man. 1

The Pyramid of Philosophy is also tripartite in another way, being composed of History, Poetry and Philosophy. History forms the base or foundation; Philosophy forms the superstructure; Poetry is the means by which the superstructure is raised and accessed. (In terms of the imagery of Solomon’s Temple, these are respectively the foundations, superstructure and “winding staircase”.) Bacon relates these three parts to “the three faculties of man’s soul, which is the seat of learning”: History is referred to Memory, Poetry to the Imagination, and Philosophy to Reason. History comprises the necessary collection of observations, facts and experiences, suitably organised or filed. Poetry is the means by which the history is presented to the mind, and also the means by which the ideas are put into action. Philosophy is composed of the thoughts of the mind, some of them being speculations or ideas, and some of them being knowledge.

Above the base, the Pyramid of Philosophy rises in stages or degrees until the apex or ‘vertical point’ is reached. These stages concern what Bacon, like Plato, calls ‘forms’ and are divided into a hierarchy of stages—material, efficient, formal and final—where the material and efficient forms are the physical laws, and the formal and final forms are the metaphysical laws. As the lower forms are derived from the higher, so the truest forms are the formal and final ones. The ultimate form, the summary law of God, is the supreme truth, which Bacon also refers to as the nature of God (i.e. goodness, or divine charity—“the work that God works from beginning to end”). This summary law, ultimate form or supreme truth is represented by the capstone or chief cornerstone (i.e. apex) of the Pyramid, where all faces and corners of the Pyramid meet at the highest point.

Following the wisdom as given in the Bible, 2  Bacon planned his Great Instauration in imitation of the Divine Work—the Work of the Six Days of Creation that leads to the Seventh Day of Rest (the Sabbath of joy and illumination). There are, therefore, six stages in the building of this Temple or Pyramid of Philosophy, which culminate in the seventh stage of completion and the use and enjoyment of the Temple. The six building stages can be summarised as: –

Bacon’s names for these six stages, as given in his ‘Plan of Work’ (Distributio Operis) prefacing his New Method (Novum Organum), are as follows: –

Besides providing literary examples, Bacon also referred to each stage symbolically as a “Book”. The six stages are shown to be arranged in two different sets of groupings, one which is more exoteric or obvious and the other which is more esoteric or cabalistic.

The exoteric grouping is depicted in the frontispiece illustration to the 1640 edition of Bacon’s Advancement of Learning. In this picture all seven books of the Great Instauration are shown, organised into three sets. The first set is comprised of Books 1 and 2, which are portrayed stacked lying down, one on top of the other, on the end of the table to Bacon’s left. The second set consists of Books 3 to 6, which are shown stacked upright on the bookshelf. The third set is the single book, the mystical seventh, in which Bacon is shown writing. This whole arrangement relates to Bacon’s Pyramid of Philosophy. The first set of books (Books 1-2) provides the survey, plan and method by which the Pyramid is built. The second set of books (Books 3-6) forms the Pyramid, which has History as its base, Poesie (the Ladder of the Intellect) as its middle, and Philosophy as its upper part. The third set (Book 7) symbolises the apex or capstone of the Pyramid and signifies knowledge of the ‘Summary Law of Nature’. On its open left-hand page are written the words “Mundus” and “Mens” (“World” and “Mind”), whilst on the right-hand page Bacon has just completed writing the phrase, “Conubio jungam stabili” (“The connection made firm in marriage”). This is a reference to the major concern of Bacon’s, that there should be a marriage between the rational and the empirical, between thought and action, between heaven (the mind) and earth (the world), echoing and explaining the “As above, so below” statement of Hermes Trismegistus. 4

By this means we presume we have established for ever, a true and legitimate marriage between the Empirical and Rational faculty; whose fastidious and unfortunate divorce and separation hath troubled and disordered the whole race and generation of mankind. 5

The understanding of man and his will are twins by birth as it were; for the purity of illumination and the liberty of will began together. Nor is there in the universal nature of things so intimate a sympathy as that of truth and goodness. 6

Nay, further, in general and in sum, certain it is that Veritas and Bonitas differ but as the seal and the print: for Truth prints Goodness... 7

The title page illustration to the 1640 edition of Bacon’s Advancement of Learning illustrates the more esoteric grouping. In this cabalistically designed picture, the six parts or ‘volumes’ of the Six Days’ Work are organised into two sets of three. Books 1-3 form the tiered base of the right-hand ‘sun’ pillar and Books 4-6 form the tiered base of the left-hand ‘moon’ pillar. Their positions and cross-relationships open the door to further understanding. The seventh book, or its meaning, is illustrated by the Masonic handshake at the top of the picture, surmounted by the motto “Ratione et Experientia Foederantur” (“Reason and Experience have been confederated/allied together”).

In a further hint of the deeper knowledges that Bacon is working with and wishes to pass on to the “Sons of Science”, in his "Distributio Operis" he tells us that examples are to be presented "by actual types and models, by which the entire process of the mind, and the whole fabric and order of invention from beginning to end in certain subjects, and those various and remarkable, should be set as it were before the eyes."

Further information can be found in Building Paradise. 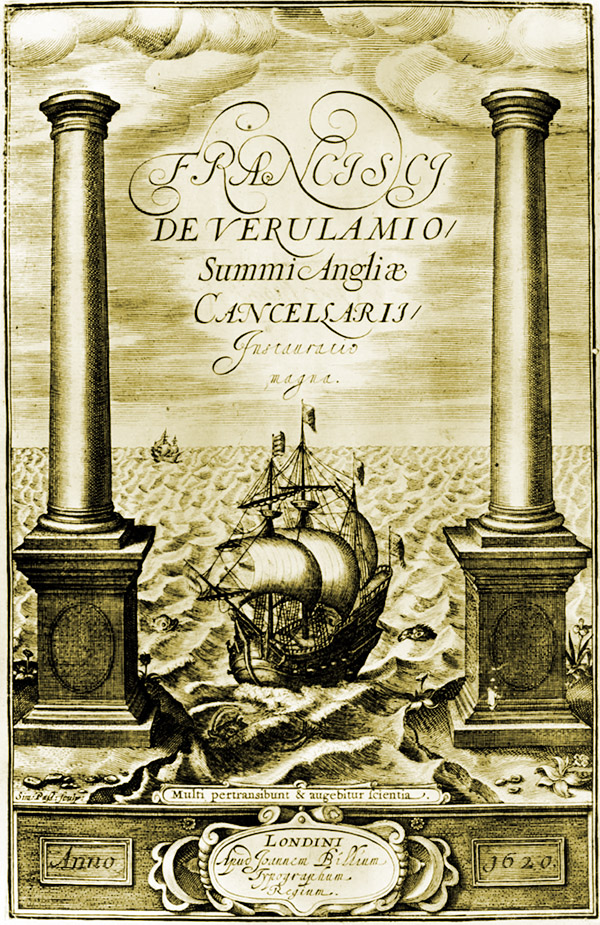