“I have held up a light in the obscurity of philosophy, which will be seen centuries after I am dead. It will be seen amidst the erection of temples, tombs, palaces, theatres, bridges, making noble roads, cutting canals, granting multitude of charters and liberties for comfort of decayed companies and corporations: the foundation of colleges and lectures for learning and the education of youth; foundations and institutions of orders and fraternities for nobility, enterprise, and obedience; but, above all, the establishing of good laws for the regulation of the kingdom and as an example to the world.”

Francis Bacon: Dedication to the King, The Great Instauration – 1620

The word 'mystery' is derived from the Greek word mysterion (plural mysteria), which refers to a play in which the truths of life are presented dramatically, often allegorically or symbolically, such as the Christian mystery of Mass or Holy Communion. The idea is to give the participants (actors and audience) a direct apprehension of truth through the experience of the mystery, rather than just academic knowledge; for ultimately it is only through the practical experience and practice of truth that we can prove it and really know it.

The basis of all such mysteries is the underlying truth that we each reach illumination or knowledge of truth in four stages or degrees that are patterned on the fundamental life process of desire followed by thought followed by action. The first three degrees (the Lesser Mysteries) are: (1) the development of our desires or will into loving desires or goodwill, having faith in that love; (2) the development of our thoughts into good thoughts and understanding, filled with hope; and (3) the development of our actions into good deeds, with humility and charity. The culmination of this results in the fourth degree, which concerns the illumination and joy that comes after completing each good deed, reflecting on it, remembering the whole process and giving thanks. The third degree, which is love in action, is referred to as self-sacrifice culminating in psychological death; the fourth degree is referred to as resurrection from that death and into the joyous light of illumination. The higher degrees (the Greater Mysteries) are involved with the further development and expansion of illumination via the path of loving, self-sacrificial service to the world and ultimately to the universe.

In the quote heading this web-page, Bacon says that the light that he has held up will be seen centuries after he is dead (he died in 1626), which suggests two things: either that it will be seen for many centuries, or that it won’t be seen until after many centuries are past. (Bacon is a master of ambiguity.) In his list Bacon specifically includes temples, tombs, theatres, and foundations and institutions of orders and fraternities for nobility, enterprise and obedience. Why is this? What is he referring to? The answers refer to the fact that Bacon was involved in the mysteries and designed his Great Instauration accordingly. He believed that we should apply our knowledge to charitable purposes only; that we can only discover and know the higher laws of nature by acting charitably, as the ultimate law of the universe is Love, which he explains is love in action—"the work that God works from the beginning to the end". 1  In two memorable statements he says: –

"In sum, I would advise all in general, that they would take into serious consideration the true and genuine ends of knowledge; that they seek it not either for pleasure, or contention, or contempt of others, or for profit, or fame, or for honour and promotion, or such like adulterate or inferior ends; but for the merit and emolument of life; and that they regulate and perfect the same in charity." 2

"I take Goodness in this sense, the affecting of the weal of men, which is that the Grecians call philanthropia; and the word humanity (as it is used) is a little too light to express it. Goodness I call the habit, and goodness of nature the inclination. This of all virtues and dignities of the mind is the greatest; being the character of the Deity: and without it man is a busy, mischievous, wretched thing; no better than a kind of vermin. Goodness answers to the theological virtue Charity, and admits no excess, but error." 3

Bacon is clearly talking about a mode of life and behaviour that the great religions and mystery schools have endeavoured to teach us for millennia. As a devout Christian he is almost certainly thinking of the teachings of Christ, but the same teachings have also been taught in the Hermetic-Orphic-Platonic wisdom tradition and mystery schools, and have their equivalent, for instance, in the karma yoga of Hinduism and the noble path of Buddhism. Indeed all the great mysteries, including the Christian mysteries, have endeavoured to teach humanity a charitable or philanthropic way of life. Basically, this means a life of human kindness, respect, helpfulness, generosity and friendship; which is why the philosophy which Bacon promotes is "moral philosophy": –

"And if it be said, that the cure of men's minds belongeth to Sacred Divinity, it is most true: but yet Moral Philosophy may be preferred unto her as a wise servant and humble handmaid. For as the Psalm saith, that the eyes of the handmaid look perpetually towards the mistress, 4 and yet no doubt many things are left to the discretion of the handmaid, to discern of the mistress's will; so ought Moral Philosophy to give constant attention to the doctrines of Divinity, and yet so as it may yield of herself, within due limits, many sound and profitable directions." 5

Besides Bacon's mention of the light he has held up being seen "amidst the erection of temples, tombs, palaces, theatres... foundations and institutions of orders and fraternities for nobility, enterprise and obedience", we are given further clues as to what he means from the symbolic names that he adopted, was given or was associated with: Apollo, Athena, Hermes, Plato, Shakespeare, Solomon, St Alban, Elias the Artist and Fra. C.R.C. (or Francis Rosicross). These names relate in one way or another to the Classical, Renaissance, Cabalistic, Christian, Freemasonic and Rosicrucian fraternities and their mysteries, all of which are dedicated to friendship and charity. Moreover, all of these, like everything else, are subject to change and, in the initiatory sense, to cyclical death and resurrection (or rebirth), transforming, transmuting, multiplying, inspiring others and seeding the new.

As Bacon emphasised, "Time brings forth the hidden Truth," little by little, cycle after cycle—and there are minor cycles and major cycles, wheels within wheels. 6  In every case there is a beginning and an ending. If the beginning is one of love, and the ending is of love fully manifested and known, then these two are truly what is named the Alpha and the Omega, 7 or Genesis and Revelation, Spirit and Bride, Lover and Beloved. Then there is joy.

In the mystery tradition in which Bacon was a great initiate, these two are symbolised by the cipher AA, for in true love the beginning and ending are fundamentally the same, and the ending becomes a new beginning. This 'hieroglyphic' cipher was employed by Francis Bacon and the Rosicrucian fraternity as a signature on certain works. It can also appear as TT, since, in terms of the Hebrew alphabet, the first letter is Aleph and the last letter is Tau; thus, for the same reasons as given above, AA can also be TT. These signatures (if they are noticed) are gateways into the great Mystery. 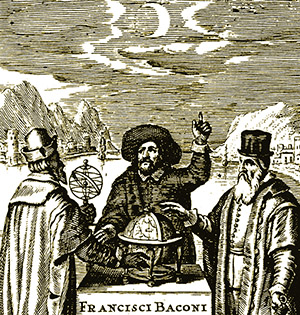 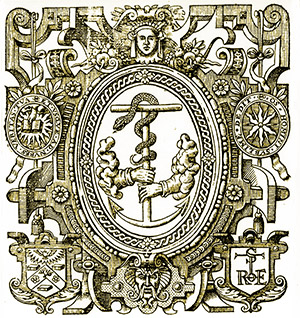 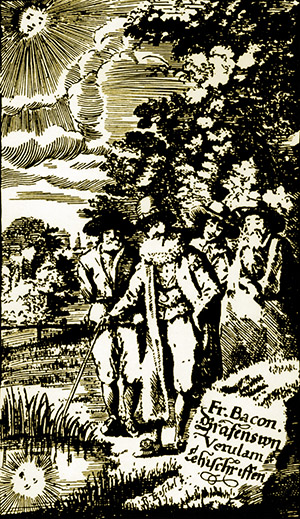